First festival of the season done, and what an epic way to kick off proceedings!

We were booked by SJM Concerts, one of the UK’s leading promoters, to curate a pop up bar called the Neighbour Hood Inn. The brief was to fill it with the kind of entertainment you’d find in a traditional pub but to add an unexpected twist and engage the ‘hungry for fun’ festival crowd. 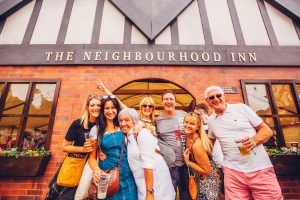 Luckily, we have a flight case full of these activities after 15 years in the game. The programme was hosted all day by our fictional pub landlord character, Mat Butcher aka Mat Slater. The live band then took to the stage for a bespoke, fully interactive live band music quiz ( different each day ), sing along bingo and 2 sets of Rockaoke, before our landlord turned to the decks for the evening under the guise of DJ Starship. 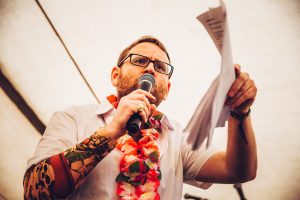 We knew what we had put together was going to be fun, but we weren’t quite prepared for the crowd surfing kids and OAP dance offs. The Neighbour Hood Arms was packed to the rafters all weekend, with full houses for the Sing-Along-Bingo, standing room only for the quizzed and complete carnage during the Rockaoke sets! 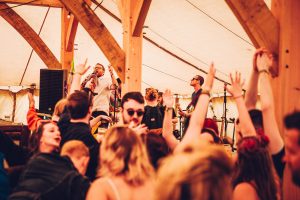 Keep your eyes peeled for video evidence of this completely interactive, Rockaoke programming. It should be making it’s way to a festival, corporate event or private event near you soon.

The Christmas party season is always the busiest time of the year for Rockaoke. It’s the perfect chance for CEO’s to strut around a stage instead of the boardroom, before being blown away by ‘Malcolm from IT’ whose death defying performance of Rage Against The Machine instantly becomes company legend.

Last year alone we brought christmas party rock stardom to the likes of Google, Sky, Mercedes F1 team ( including Nico Rosberg ), Ernst & Young, ASOS, Nintendo, O2, Leeds United FC and many many more. Here’s a quick glimpse at some of the 50+ parties played in December 2015 by the original, all singing, all crazy dancing, totally rocking, full band Rockaoke.

This Christmas we’ve come up with a few new tricks to add even more Yuletide fun to your christmas party. You can either add them onto the beginning of your Rockaoke based event or as a stand alone booking.

Get the party going early with a visit from our sing a long Mariachi Band. It could be during a sit down meal, around the office in the afternoon or at a drinks reception; the band will walk around the crowd, playing classic christmas party hits and encouraging revellers to warm up their vocal chords. This is the perfect starter to serving up full band Rockaoke as your main entertainment course.

Your venue maybe a bit short on space or the neighbours oddly get annoyed by live rock bands next door – so why not consider Acoustaoke?! This is a stripped down, zero emissions version of Rockaoke, using acoustic instruments and minimal sound equipment. Acoustaoke goes down a storm at private house parties but would also drop nicely into a communal work space for lunchtime fun or as part of pre dinner drinks. Christmas party song lists and elf hats provided as standard and don’t worry, it’s just as lively as it’s big brother Rockaoke. See proof below

Acoustaoke at Festival No.6 in the Old Mout Kiwi Camp from rockaoke on Vimeo.

Using the hundreds of songs in their repertoire and a love of music trivia, Rockaoke have developed their own take on the traditional music quiz – and it’s perfect for any christmas party. Whether you opt for a few rounds during dinner or make it the main event, The Christmas Album provides festive rounds that mix a standard music quiz with ROCKAOKE madness. Test yourself with live intros / riffs, beat the night club singer, try to sing the next line or dare to take on the ROCKAOKE challenge. This has bamboozled contestants from the fields of Isle of Wight Festival to corporate events at Hard Rock Cafe.

“Rockaoke created a Live Musical Quiz for us at the Hard Rock Cafe last Christmas. It was perfectly pitched at our audience, with lots of relevant festive rounds which were both fun and interactive. The live rounds were great and the highlight had to be the sing the next line round which turned into a huge Bon Jovi sing-a-long at the end of the night – all in all, a great event” Faye Lewington – Senior Client Relationship Manager – BDO

Drop us a line and let us know what combinations of Rockaoke madness you’re prepared for this Christmas!

4 Feb 2011 Uncategorized belfast, Don't Stop Believing, Highway to Hell, Living on a Prayer, rockaoke, Sex on Fire, Simply the best, The Empire, You've Got the Love

The Empire ( Belfast) Strikes Back!

It was always going to be good but REALLY!

Having played The Empire in Belfast a couple of times before we are always excited to go back and had high hopes for a glorious night of rock. However when we arrived in Belfast on Friday to find swathes of luminous pink Rockaoke posters slapped across the city centre ( we’re not sure by who) and double page spreads in gig guides we started to speculate about what might just go off on the Saturday night. Add in the fact that our hotel was a drum stick throw away from The Empire and we were all on a high as we strode out into the Friday night to ensure we were fully up to speed with all local customs. Addmitedly our tour of the sites led us straight to The Crown and a protracted 4 hour sejourn in booth two. 10 pints of guinness, 3 sambucas, a load of inappropriate jokes from Smooth ( head of security and chief photographer) and a stumble around town later we ended up back at the Empire where we gatecrashed the Salsa session in the bar down stairs and Danny a) tried to teach everybody the Maccam Conga and b) tell everyone that we would be playing on the big stage upstairs and it would undoubtably be ” a reet good craiic”

Following a leisurely breakfast and an afternoon G&T we piled into a new local bar, Lost Society for dinner. There, we were wined and dined by the glorious Maltman crew and told that we had already sold 200 tickets and they knew of at least another 150 peops who were coming. Now at fever pitch we burst through the doors of The Empire to see hundreds of people gleefully filling out song requests and piling them up high on the stage. We gathered back stage for a Corona laden rallying call and then the voice of god boomed out across the venue.”Ladies and Gentleman…..are you reeeeeaddddy to roooooooocccccck!’

The whole place erupted as we strode onto stage and pounded through the formalities of the geeing up, announcing a raffle, and our first song. Then onto the real stars.What ensued was quite simply one of the finest sets of Rockaoke ever to have been witnessed by our 200 gig a year souls. The crowd were electric, the performers were eccentric, the band were on fire, the Empire was one in one out ( 450 capacity, you do the math) and we were doing what we do best, making people into rockstars……IT WAS AWESOME! From a breath taking rendition of Highway to hell, through a strutastic Simply the Best to an emotionally rousing Don’t Stop Believing the half was jam packed of quality performers and brilliant moments.

The second half kicked off with a bang with a knee slide riddled Whole Lotta Rosie and bounced around some pop classics before ending with a beautiful You’ve Got the Love by our winner on the night Charlotte and scintilating versions of Living on a Prayer and Sex on Fire. We headed off stage, already talking about going back and discussing how that could be beaten in 2011? We still are not convinced we know.

As if it couldn’t get any better we then headed off to the afterparty where Dann and Basil where swamped by groupies and Jon and Mat wondered why they didn’t have any. Then to finish the night off Mat and Dan hosted an after after party in their room to which only Basil, Aggie and Craig were invited. We wrapped up a wonderfully successful and heavily intoxicated evening at about 4:30am.

Its been a while since our last blog, with so much happening all the time, its hard to keep up, but here we are to fill you in on how stuff has been going in the ROCKAOKE camp.

We have done some really amazing gigs in the last few months such as Download!! which was nothing less than amazing! We played to over 2000 people, which was also immense. And the best thing about it was, the singers were brilliant, which really does help the Rockstar experience, although anyone can join in the fun, and feel like a Rockstar! You can find some of the videos for this on our youtube channel: https://www.rockaoke.com/rockaoke_video.php

Its also Gaymers festival season, where we have been enjoying yet another season working for the lovely people @ Gaymers. So far we have played Lattitude and Big Chill, which are two of our favourite festivals to date, and in amongst rocking out in The Gaymers Lost Orchid, we found time to go watch the amazing Massive Attack. A totally mind blowing experience to say the least!

The festivals are always fantastic, but we have been doing some awsome weddings too, with the most fun, memorable and coolest wedding of all time, being Louise and Diego’s wedding in Dorset, which got featured in Brides Magazine. We had a great time and met some really cool people, and drank some beautiful Spanish wine, a personal highlight. Negative point being most of it ended up all over my Primarny special white shirt. Should have had my very classy head torch switched on at this point 🙂 A special thanks goes out to Alice @ Brides Mag for being so kind and featuring us in her blog.

It was an absolute honour to be asked to play @ Alan Shearer’s 40th birthday, where the great man himself, opened the second set with a very credible rendition of “Sex on Fire”. This has to be the top ROCKAOKE moment of all time. The guy is a feckin legend, even if he did play for Newcastle! Top goal scorer in the premiership, 30 goals in 63 caps for England, unreal. As if thats not living the dream enough, he has also fronted his own rock band.

His party was a who’s who of premiership footballers and managers alike, and also local boys Ant and Dec were present. If rumour is to be believed, both Ant and Dec and Shearer, did a version of “Lets Get Ready to Rumble” in the early hours of the morning. Priceless!!

We were featured in the Bizarre section of The Sun http://www.thesun.co.uk/sol/homepage/showbiz/bizarre/3098956/Shearer-40th-is-rocking.html, got a mention on Radio 1 by our old friend, Chris Moyles, and we also had the pleasure of playing with the awsome, Matt Fincham, from The Chris Moyles Show

All in all, everything is good in the Rockaoke camp, with Leeds and V Festivals coming up, and our usual, great fun nights, at both Punk and Karaoke box.

More blogs soon people. Hope to see you all at a night near you, really soon.

For now, keep on ROCKAOKEING 🙂